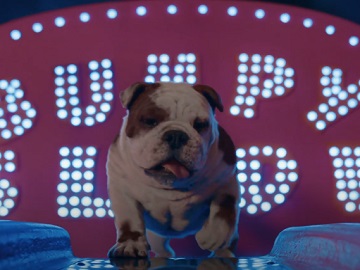 Churchie the dog is back to the screen in a new advert for UK car insurance company Churchill.

The spot, which informs that Churchill gives up to 100 pounds for immediate expenses to customers, “should life come to a stop,” so they keep moving, features the company’s mascot going down the Bumpy Slide.

The song used in the ad is the 2019 single “Morals” by Africa Express, featuring Moonchild Sanelly, Mahotella Queens, Muzi, and Mr Jukes.

Churchill specifies that claims can only be for uninhabitable home due to an insured event or undriveable car with comprehensive cover (excludes glass only claims).

In 2019, the car insurance company started using a realistic 3D mascot of its British bulldog mascot, originally founded in 1989. In 1996, a nodding dog toy, which was voiced by comedian Bob Mortimer and christened the catchy slogan “Oh yes!”, served as a mascot. The 2019 advert saw Churchie the dog on a skateboard, being all chill, knowing that everything has been insured by Churchill.