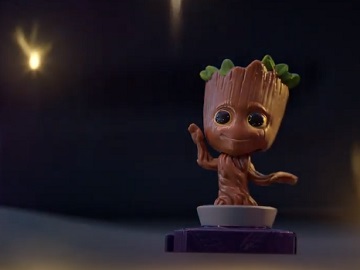 The spot follows a group of friends on a roadtrip, who enjoy a night ride with their all-electric Bolt EUV. At some point, as the girl in the backseat watches Guardians of the Galaxy, the driver takes his hands off the steering wheel and lets the available Super Cruise hands-free driver assistance feature to take control, so that he could admire the road and the view.

“When imagination meets power, the galaxy of possibilities awaits,” the voiceover says toward the end of the commercial, which also sees a Baby Groot bobblehead keeping company to the three friends along their journey.

The song used in the ad is the 1974 single “Rock Riot” by Daniel Edwardson, from his “Kpm 1000 Series: Discotheque” album.