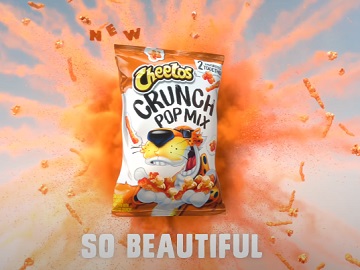 CHEETOS promotes its Crunch Pop Mix in a new commercial.

“Some snacks are just destined to be together,” the voiceover says in the opening of the 15-second ad, introducing the new Crunch Pop Mix. “Wow, it’s so beautiful,” he also adds before saying the tagline “It’s a Cheetos thing”.

At the end of the last year, the Frito-Lay brand teamed up with Bad Bunny for a new ad for its Flaming Hot Crunchy Cheetos. The rapper (born Benito Antonio Martínez Ocasio) is featured in a recording studio as he starts singing and dancing after eating a Flaming Hot Cruncy Cheetos crip from Chester Cheetah. A new Bad Bunny song debuted during the American Music Awards on November 22 as part of the campaign.

Cheetos sponsored the expansion of the Latin award categories at last year’s American Music Awards, including favorite male artist, favorite female artist, favorite album, and favorite song. Moreover, in collaboration with the singer’s Good Bunny Foundation, it is giving back to the Hispanic community with a $500,000 commitment.