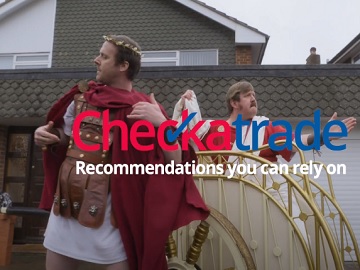 Checkatrade promotes its website, which is a completely free service allowing users to search for tradespeople who work near them from anywhere in the UK, in a new TV ad.

The spot features Julius Caesar sitting in his garden and relaxing when Brutus shows up and asks him if he contacted the builder he had told him about. Caesar answers that he doesn’t need his recommendations because he’s got Checkatrade, where the tradespeople are constantly checked, reviews are real and help people get three quotes. “That way I know they’ll do the job right and not stab me in the back, like some other people I know,” he also says. Brutus tells him, in response, that he can’t use that in every argument.

The end of the advert sees the two showing off their dancing moves while the tagline “Recommendations you can rely on” flashes across the screen. The Checkatrade jingle also plays.

According to Checkatrade, over 1 million customers visit Checkatrade every month to find trades with great reputations. They can select what they are looking for and request a quote and, once the project is completed, they can review the trade. On Checkatrade you can find plumbers, electricians, roofers, builders, gardeners, painters, carpenters, plasterers, tree surgeons, landscapers, handymen, locksmiths, tilers, and more.