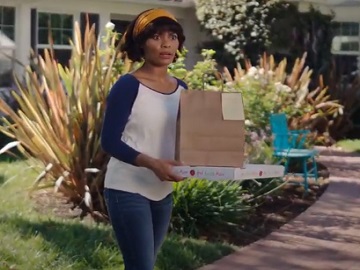 Chase promotes its Chase Freedom Unlimited card in a new commercial, highlighting that you earn 3% on dining including takeout, plus 1.5% on everything else you buy.

The spot features Kevin Hart informing a neighbor named Rita (played by Tiffany C. Adams) that with 3% cash back on dining, including takeout, from Chase Freedom Unlimited, she’s always earning. Learning the news, Rita, who’s ready to get inside with her takeaway, declares officially a takeout week. Hart praises her decision, saying it’s a good choice, and urges consumers to earn 3% on dining, including takeout, and so much more.

Onscreen lines inform that card members also get 3% at drugstores, 5% on travel purchased through Chase, and 1.5% on everything else they buy. Restrictions and limitations apply.

The award-winning stand-up comedian, actor and producer has starred in several other ads for Chase. In 2019, he signed a multi-year deal to host workshops and spots with the bank around financial fitness. Chase has also teamed up with several other celebrities for its ad campaigns, including Serena Williams and Jason Wu.