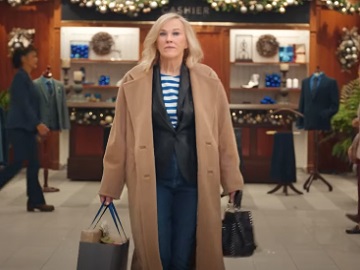 Chase has enlisted Catherine O’Hara to join Kevin Hart for its Christmas ad campaign this year.

One of the spots, titled “‘Tis the Season for Cashbacking,” features the famous actress, who played Kevin’s mother, Kate, in the “Home Alone” franchise, realizing she lost Kevin while shopping. She starts shouting his name and looking for him, but it soon turns out that she was actually looking for Kevin Hart. The comedian shows up carrying a huge gingerbread house and tells his shopping partner that he was busy “cash backing for the holidays with Chase Freedom Unlimited.” He showcases the credit card, which lets him earn 5% back on travel purchased with Chase, 3% on dining, including takeout, 3% at drugstores and 1.5% on everything else, and he shows her other items he bought, such as a snow globe.

The end of the commercial sees the two joking about the fact that she lost another Kevin. “It’s a holiday tradition,” O’Hara answers.

Hart has starred in several other ads for the bank’s Freedom Unlimited credit card since he became a brand ambassador for Chase, in January 2019. The comedian/actor signed then a multiyear partnership to promote financial wellness and the Chase Freedom Unlimited credit card in a campaign that also includes digital video, workshops, events, and GIFs.