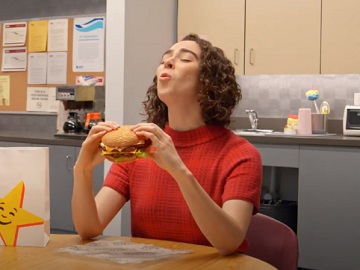 Carl’s Jr. has released a new ad to announce the return of the Big Carl and the Really Big Carl.

The 30-second ad takes a jab at McDonald’s Big Mac by comparing the Big Carl with the competitor’s Big Mac. “Heard you’re a piping hot piece of lunch, Big Carl,” a woman says in voiceover in the opening of the commercial, while on the screen the Big Carl is shown. “Make Big Mac look like a micro patty baby lunch,” she adds. “But your patties are full grown, aren’t they? Maybe too big. You too big for your beef britches, Big Carl. Well, guess what, hot shot. I’m gonna devour that meat like a cheese chick burger wolf,” says the voiceover, who it turns out to be a woman at work, in lunch break, who’s also howling like a wolf, impressing a male coworker.

The commercial ends with the voiceover urging viewers to hurry to Carl’s Jr. for the Big Carl and the Really Big Carl.