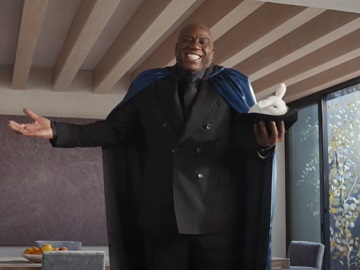 Capital One has brought Spike Lee, Charles Barkley and Samuel L. Jackson back for its NCAA March Madness campaign.

The spot, titled “It’s Like Magic,” features Barkley telling Lee and Jackson that he just deposited a check using his Capital One Banking app. “It’s like magic!” he says and at this point Earvin “Magic” Johnson Jr. shows up from nowhere. Asked by Lee where he came up from, Barkley explains that the app is responsible for his appearance, saying once again that “it’s like magic”. Johnson is ready for a new trick, which involves a danger for sportscaster Jim Nantz and Barkley, who asks if he can have a last meal.

The three longtime pitchmen, who appear in Capital One campaigns since 2015, co-star in other six ads released by Capital One for this year’s NCAA men’s basketball tournament (created by lead agency GSD&M and its predecessor, DDB). Soul diva Gladys Knight also stars in one of them, titled “All Aboard,” in which Lee, Barkley and Jackson are standing in for her iconic backup singers, known as the Pips. Another spot features kids playing pint-size versions of the main trio.