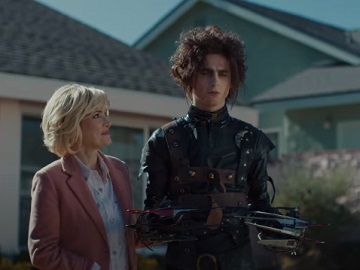 Cadillac has enlisted Timothée Chalamet and Winona Ryder to star in its new campaign for the all-electric Cadillac LYRIQ.

Based on the idea that “A new generation of Scissorhands meets a new generation of driving,” the 30-second spot features Chalamet as Edgar, Edward Scissorhands’s son, in a variety of everyday situations that cause him stress due to his peculiarity (he also has shears for hands, just like his father). For instance, his alarm clock becomes damaged every single morning and the footballs he catches become useless.

One day, his mother, Kim (Ryder), shows him the all-electric Cadillac LYRIQ and takes him for a ride. He gets to drive the car and try the Hands-Free Super Cruise, which is a driver assistance feature for compatible roads.

Melissa Grady, Cadillac chief marketing officer, said in a press statement that they love “the creative concept of Super Cruise and the LYRIQ opening up Edgar’s world and bringing confidence to his daily life”. “At a time when people are looking for an escape from the challenges of the past year, it was a privilege to revisit the beloved story of Edward Scissorhands in a fresh, modern way and showcase Cadillac’s electric future during the biggest game of the year,” she also declared.

The commercial debuted in the fourth quarter of this year’s Super Bowl.

According to the automaker, the all-electric Cadillac LYRIQ, which will go into production in the first half of 2022, will deliver a Rear-Wheel-Drive variant and a Performance All-Wheel-Drive variant, allowing you to choose your fully electric rush. The expected range is of 300 miles on a full charge based on Cadillac testing. LYRIQ will offer at-home Level 2 (AC) charge rates up to 19kW and public DC fast-charging rates of up to 150 kW.

Super Cruise, the only system that provides true hands-free driving on more than 200,000 miles of enabled roads in the U.S. and Canada, will be available on the upcoming LYRIQ, as well as the 2021 Cadillac Escalade, CT4 and CT5.