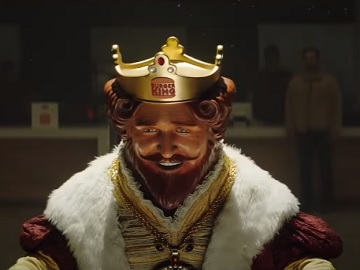 The spot features the Burger King in bed, reading tweets about the fast-food chain’s Ch’King, which has received lots of positive reviews. He then falls asleep but has a nightmare – the king finds himself in a Burger King restaurant, where people – from staff to customers – shout to the King “Run, King!”.

“Flame grilling used to be your thing, but now people are going chicken crazy over the new chicken and you’ve caught them bread-handed. Has the Whopper finally met its match?” the voiceover asks, driving the King crazy.

The end of the commercial sees the mascot back in his bed, waking up, and the voiceover introducing the new hand breaded Ch’King.