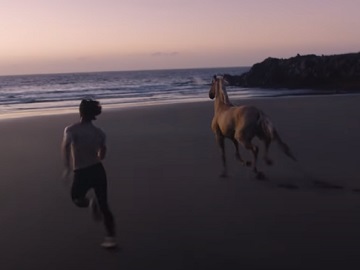 Burberry has released a new ad for its new fragrance for men Burberry Hero, which marks Riccardo Tisci’s first scent for Burberry.

The spot features the Oscar-nominated actor Adam Driver running on the beach and into the ocean alongside a horse. He swims in the water together with the animal and eventually he comes out as a Centaur, a mythical creature half man half horse.

Serving as soundtrack is the 2014 single “Two Weeks” by English singer FKA Twigs, from her debut studio album, “LP1”.

Described as “a new masculine spirit exploring the house codes of duality and the power of the animal kingdom,” the fragrance will be available in two sizes: 50ml and 100ml. A gift with purchase will be available with the 100ml size.