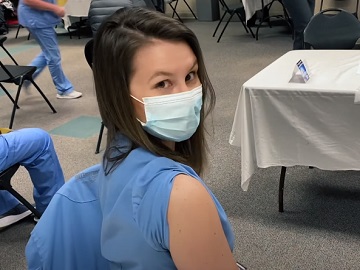 Budweiser has released its Super Bowl 2021 commercial, highlighting that it won’t run during the Big Game, the money being redirected to support COVID-19 vaccines awareness and education.

“The thing about America is we can do anything. We can turn rooftops into mountaintops. We can turn boundaries into common ground. We can turn solitude into closeness. And screentime into playtime. Silent stadiums? Let them hear the roar of history being written. We turn waiting and waiting and waiting into dancing and dancing and whatever that is. And together let’s turn our strength into hope,” Rashida Jones, who serves as narrator, says in the 90-second ad, which is a compilation of videos that went viral during the pandemic, featuring a diverse cast of people. Some of them are singing at windows and on balcony, others are dancing while waiting in line, and other having the COVID vaccine administered.

The film ends with onscreen lines informing that, “For the first time in 37 years, Budweiser isn’t airing a Super Bowl ad. Instead, we are redirecting our advertising dollars to raise awareness of the COVID-19 vaccines. Beginning by joining forces with the Ad Council and COVID Collaborative. See you at the game next year”.

The soundtrack music is Bill Withers’ 1972 single “Lean on Me”, from his second album, “Still Bill”.

Food & Drinks
Previous: Progressive Sign Spinner Replaced by his Dad Commercial
Next: Wendy’s 2 for $4 Man at the Office Commercial