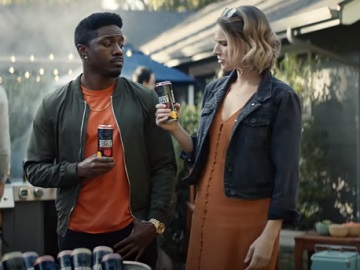 The spot, titled “Last Year’s Lemons,” opens with a group of friends at a garden party grabbing a can of Bud Light Seltzer Lemonade and asking when the brand started making lemonade. “Probably when 2020 started handing us all those lemons,” answers one of them. Another one adds that “2020 was a lemon of a year” and starts recalling some of the past year’s events. As he does that, a series of quite shocking scenes ensues, with various people being affected more or less by lemons falling from the sky. A man riding the bike gets hit by a lemonade in his head, which leads him to fall on trash cans on the side of the road. Another man, laughing at the first one, soon loses his smile as he also gets hit by one of the thousands of lemons falling from above, right into his face. Coworkers in an office all gather to the window to watch the unlikely “rain” which causes mayhem on the city streets, in airports, and even in the people’s homes. A young man who’s cutting his own hair with clippers cuts it too short because of a lemon, for instance.

The commercial, set to the tune of “Monday, Tuesday, Wednesday” by Jo Stafford and Gordon MacRae, also features a bride crying under a table at her wedding because the lemons ruined the event.

As the spot ends and the group of friends at the party are back to the screen, concluding that there were a lot of lemons, a fourth friend shows up, trying to remind them a saying. “Well, you know what they say… ‘When life gives you lemons…'”. However, he doesn’t get to end the sentence, because one of the girls interrupts him, telling him they all know the saying.

Anheuser-Busch won’t be advertising its iconic Budweiser brand during the Super Bowl this, for the first time since 1983, choosing to donate the advertising funds to coronavirus vaccination awareness campaigns. However, the beer giant still has four minutes of advertising during the Big Game for some of its other brands including Bud Light, Bud Light Seltzer Lemonade, Michelob Ultra and Michelob Ultra Organic Seltzer.

Super Bowl LV will be played on the Raymond James Stadium in Tampa, Florid, on February 7, and it will be aired on CBS. Country music singer Eric Church and R&B singer Jazmine Sullivan will be performing the national anthem, and the halftime show will be headlined by Canadian singer The Weeknd.