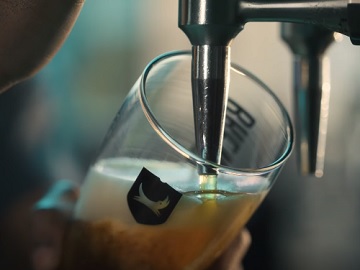 BrewDog has launched a new ad campaign, called “Beer For All”, to promote its beer and highlight that they are the world’s first carbon negative brewery.

“Brewdog makes beer but it’s not just beer for laughing hipsters or cliched father-son moments. It’s beer for him, her, them. For tall people, small people, people who believe in aliens, in God, in nothing. It’s beer for happy couples and unhappy couples, browsers, close talkers, fake listeners, shopkeepers, shoplifters, bad swimmers.

BrewDog makes beer for curious people, friendly people, guys who’s almost certainly on snake, window sill abusers, people with cold legs and people who pretend to meditate but are really just thinking with their eyes closed. Yep, our beer is for everyone,” the voiceover says throughout the advert, explaining that BrewDog is the world’s first carbon negative brewery and plants trees for every beer you drink, making it a better world for everyone who drinks BrewDog and even those who don’t.

“That’s why we’re the planet’s favorite beer,” the voiceover also says, while on the screen a cat is shown drinking her milk and the BrewDog Lost Planet First Lager and Punk Ipa Post Modern Classic are shown, along with the tagline “BrewDog Beer For All”.

Previous: Groupon Grab Life by the Groupon Woman in Hand-Shaped Costume Commercial
Next: Very.co.uk Back to School The Throne Advert Song