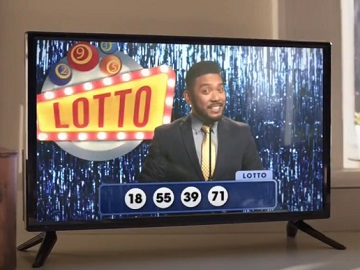 Bounty has dropped a new ad for “The Quicker Picker Upper”.

The spot features a man who checks his lottery ticket while the winning numbers are announced on TV and realizes that he’s the winner of the grand prize. He places the ticket on the countertop to celebrate, but he knocks his drink over, putting in danger the winning piece of paper. He yells in fear, his wife yells and even the host on TV does the same as the drink is about to ruin the lottery ticket. Luckily, the couple react quickly and wipe up the substance with Bounty paper towels in time.

“Bounty picks up messes quicker and each sheet is two times more absorbent so you can use less,” the voiceover says at the end of the 30-second commercial, which also sees the wife grabbing the ticket and telling her husband that she’ll hold on to it.