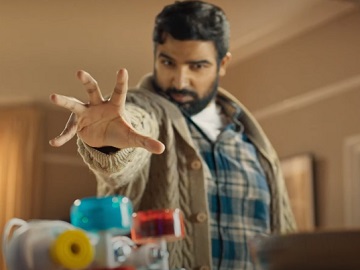 Barclays has released a new TV ad for its mobile app, introducing the notion of Moneyverse.

The spot, titled “Master your Moneyverse,” features a dad who, after opening the Barclays app, is transported from his home into his Moneyverse, where he can see his entire relationship with money. If, initially, all his expenses float around him in chaos, things change thanks to the Barclays app. His expenses immediately get sorted and the man has a clearer idea on what he spends his money. He is thus able to see that a significant amount of his income goes to car-related spending, so he decides to cycle more in the future. With a hand gesture all the cars in the transportation category disappear and, once returned in his home, he tries the same “trick” with a roller skate, but it doesn’t work.

The advert ends with the voiceover urging you to “Master your Moneyverse” and saying the tagline “Make money work for you”.

With the Barclays app users get access to a range of money-management tools, including spending categories, calendar view and savings goals, free financial help from the bank’s Money Mentors and digital support from its Digital Eagles.

Barclays also offers, on its website, tips for everyday money management, for saving money quickly, for helping you take control of your money and take care of your credit score, advice to help boost your finances in a week, and more.