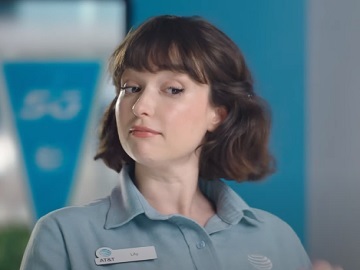 The spot features the company’s spokeswoman holding a training session for two employees and using a whiteboard to better explain her statements. Thus, she says that, at AT&T, everyone’s getting the company’s best deals on all smartphones, including both new and existing customers.

After drawing lines on the whiteboard, she asks her audience if there are any questions and there is one that puts her a little in trouble, namely why she used a permanent marker. She answers that she wanted to make sure they remembers and declares that she’s going to get a new whiteboard.

The commercial ends with the voiceover saying “It’s not complicated. Only AT&T gives everyone our best deals on every smartphone, like the Samsung Galaxy S21 5G for free”.

Milana Vayntrub (33) starred in AT&T ads as saleswoman Lily Adams from 2013 to 2016 and was brought back to the small screen by AT&T last year. She has also had small roles in film and television, including Life Happens, This Is Us, Other Space, and more.