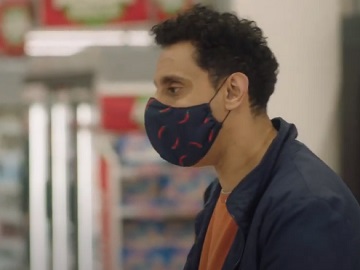 Asda, one of UK’s most popular supermarket chains, promotes its Big Savings Event, with thousands of rollbacks across the store, in a new ad featuring Sunny.

This time, the curly haired man (actor and DJ Muzz Khan, from Burnley, Lancashire) takes one of his sons, Mylo, to Asda to teach him the ways of a smart shopper and, at the end of the grocery shopping session, the boy becomes a smart shopper, too.

Throughout the ad, which also highlights that Asda received the Q Award vegan retailer of the year 2020-2021, various deals are shown, such as on selected fruit and vegetables and plant-based meals. The offer on fruit and veg ends on January 18th and the one on vegan meals ends on January 13th.

The song used in the advert is the 1985 single “Walk of Life” by the British rock band Dire Straits, from their fifth studio album, “Brothers in Arms”.

Muzz Khan also starred, along with the members of his family, in the retailer’s Christmas 2020 advert, as well as in several other ads created by Asda and AMV BBDO.