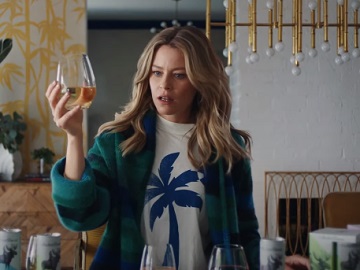 Elizabeth Banks tries luxury wine in a can in the latest commercial for Archer Roose, created by Colossus.

The actress (who is also a producer, writer and director) stars in a 60-second spot, alongside co-founder/CEO Marian Leitner, who says that one day she came home from work and found Elizabeth Banks in there. The uninvited guest is shown rummaging through Marian’s kitchen and grabbing from Marian’s fridge all kinds of products, including a can of Archer Roose. Marian also mentions that Elizabeth, who is featured using Marian’s bedroom bed and cutting her toenails over the kitchen sink, doesn’t want to leave and points out one other thing, that surprised her – namely that Elizabeth really knows wine.

The commercial debuted on May 28 on connected TV and social media.

Elizabeth Banks joined the Archer Roose team as Co-Owner and Chief Creative Officer at the end of last month. As a new major investor and owner in the company, she will add strategic value to the creative development for the company, on both brand and product side.