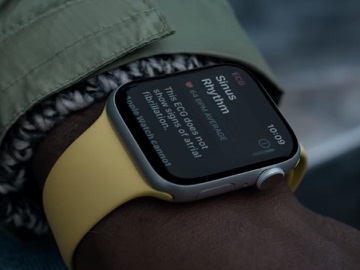 Apple says that “The future of health is on your wrist” in its latest ad for the Watch Series 6.

The spot highlights that you can take an ECG anytime, anywhere, with the brand’s Watch Series 6 and the ECG app. A
man wearing the Watch Series 6 takes an ECG in all kinds of environments and shows how the ECG app lets him take an
ECG without needing an appointment or a fancy machine or even needing to move a muscle.

The user is seen taking an electrocardiogram in the comfort of his home, in a park, while watching a tennis game, while being at the dentist, at the beach, at a movie theater, in the car, during a storm, and even while fishing on a frozen lake, in the middle of nowhere.

“The future of health is on your wrist” an onscreen line reads at the end of the commercial, which features the 2019 song “Tokoliana” by Congolese collective Kokoko!, from their full-length debut album, “Fongola”.

In order for the ECG app to work, an iPhone 6 or later is required. This app is available on Apple Watch Series 4
and later (not including Apple Watch SE) with the latest version of iOS and watchOS. The ECG app is not intended for use by people under 22 years old.

Apple’s “The Future of Health is on Your Wrist” campaign highlights different health features of the watch. Other
two spots focus on the Workout and Sleep apps for health and fitness tracking. Sleep app helps users by muting
notifications and automatically playing music on the iPhone. In the meantime, the watch is monitoring heart rate and checking blood oxygen levels to track sleep quality.