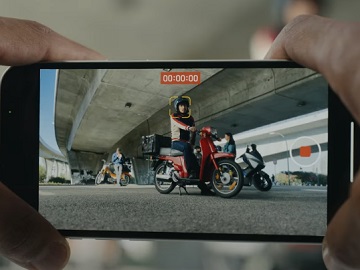 Apple has launched its iPhone 13 and a series of new commercials to showcase its capabilities.

One of the ads, created like a real, fake movie titled “Everyday Hero,” follows a delivery guy as he rides his motorcycle to make a series of deliveries across the town and out of the town, as well. The video showcases some of the new iPhone’s features, such as the water resistance, Ceramic Shield tougher than any smartphone glass, new Cinematic mode, which adds shallow depth of field to your videos and shifts focus automatically, superfast 5G, A15 Bionic chip, even longer battery life and improved Night mode.

The soundtrack is provided by the 2014 single “Work All Day” by East London grime duo Newham Generals’ Footsie, from the “Grime 2015” album.

All of Apple’s new iPhones, introduced on Friday, September 14, during Apple’s event, are now available for pre-order. Devices will go on sale on September 24. The tech giant also launched on this occasion the new Apple Watch Series 7, with the brand’s largest, most advanced display yet, Apple Fitness+, the first fitness service powered by Apple Watch, and the new iPad mini.