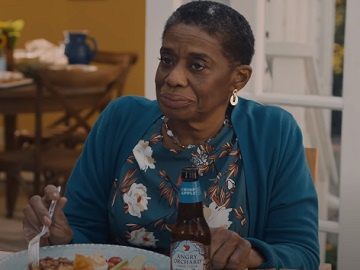 Angry Orchard promotes its apple cider in a series of new ads, highlighting that “Sweet” isn’t some four-letter curse word and we should embrace it, given the fact that we all like sweet.

One of the spots features a gathering at an old lady’s house, where a conversation about Angry Orchard gets heated. When a young man says that “Angry Orchard is sweet,” another one lands on him for “that kind of language” (note: the word “sweet”, which is censored) in front of grandma. The latter, who heard the argument, jumps in to say that “Angry Orchard is good and sweet” indeed.

In another spot, the man who says that Angry Orchard hard cider, made using real apples, “is delicious and naturally sweet,” is shocked to learn that the word “sweet” is being bleeped every time he pronounces. He gets mad and leaves, not without pointing out that “it’s the good kind” of sweet and shouting “enough with the bleeping”.