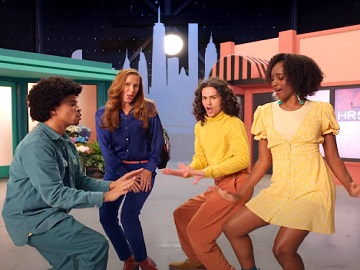 American Express continues its “Let’s Go Shop Small” campaign with a series of new ads, that encourage consumers across the country to support the small businesses they love in their community this holiday season and all year long.

The campaign includes spots created as short musicals where the protagonists are performing original songs whose main message is to “Go Shop Small” in various cities. One of them is dedicated to New York, another one to San Francisco, and others for specific small businesses, such as Semi Colon Bookstore in Chicago, Noto Botanics in LA, and more.

The commercial for shopping small in New York features the singers performing the following song:

“In the biggest city of them all (not even close)
New York is made just for shopping small
Manhattan, Bronx, Brooklyn, Queens and one more, I think… (it’s Staten Island)
LES for endless nights
The best food is in Jackson Heights
(And Flushing! And Harlem! And Chinatown! And City Island!)
And Soho for boutique shopping!
So, grab your Amex, see you there,
I’ll meet you anywhere but Times Square.
Let’s Go Shop Small in New York.”