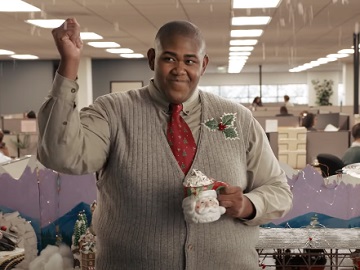 Amazon advertises its Early Black Friday Deals in a new commercial created in partnership with production company Ruffian and directed by The Bobbsey Twins from Homicide.

The spot features Will, an office worker who is saving big holiday shopping at Amazon. He’s using the mobile app to shop for Christmas decor and turns into “Wonderland Will”. He impresses his colleagues with stunning Christmas decorations and fake snow, which falls from above when he snaps his fingers.

The voiceover urges you to deck the halls with printer paper, recycled, of course.

The e-commerce company has been promoting its deals in other ads, too, all carrying the tagline “Spend less. Smile more”.

One of the spots features Betty, a grandmother who orders on Amazon several toys for her grandchildren and becomes “Bear Hug Betty” as she keeps the children in a long bear hug. Another one features Maureen, a woman who gets deals on housewares and becomes “Maureen the Merrier”. She is shown giving her grandson, whom she loves very much, a huge piece of meat during one of her holiday lunches.