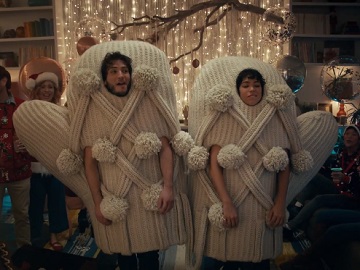 The spot features a young couple who shopped up to 40% off with the Amazon Last Minute Christmas Deals so now they can be the party balls. The two life partners are shown costumed as mittens at a Christmas party and impressing everyone with their appearance and dance moves because they have the party season all sewn up.

The advert ends with the voiceover urging viewers to shop up to 40% off with the Amazon Last Minute Christmas Deals (valid between December 1st and December 23rd).

The e-commerce company has been promoting its deals in other ads, too, all carrying the tagline “Spend less. Smile more”. Will, an office worker who is holiday shopping at Amazon, turns into “Wonderland Will”. He impresses his colleagues with stunning Christmas decorations and fake snow, which falls from above when he snaps his fingers.

Betty, a grandmother who orders on Amazon several toys for her grandchildren, becomes “Bear Hug Betty” as she keeps the children in a long bear hug. Maureen, a woman who gets deals on housewares, becomes “Maureen the Merrier”. She is shown giving her grandson, whom she loves very much, a huge piece of meat during one of her holiday lunches.

Amazon offers consumers the possibility to browse a selection of holiday related items (the Amazon Christmas Shop) and find the perfect gift for their loved ones by using the Amazon Gift Finder, which allows them to identify gifts based on the interests of the person they are buying for or on the sum they want to spend.