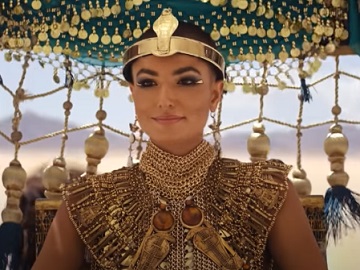 Amazon promotes its Prime service in a series of new ads created by Amazon’s in-house creative team together with Joint London, that take iconic heroines from history and show how having access to Prime accounts would have changed their familiar tales.

One of the spots features Cleopatra who, after watching the film “Coming2America” on Prime Video (starring Eddie Murphy), she realizes she doesn’t have to be a diva. Prince Akeem and his generosity become an inspiration for her so she decides to treat her subjects to accessories to help them enjoy desert life.

The song used in the ad is the 1978 single “Driver’s Seat” by the British band Sniff ‘n’ the Tears, from their debut album, “Fickle Heart”.

Another spot reimagines Rapunzel’s story and features the heroine with long hair ordering herself a ladder with Prime One Day Delivery to get out of her tower and opening a hairdressing salon empire.
The commercials run across radio, social, broadcast, and digital channels.