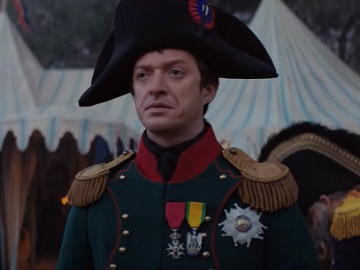 “With award-winning entertainment and one-day delivery on thousands of items, Prime changes everything.” this is the idea behind the latest installment in Amazon’s “Prime Changes Everything” campaign.

The commercial, developed by creative agency Joint and directed Wayne McClammy at Hungry Man, features Napoleon watching an episode of The Marvelous Mrs Maisel on Prime Video and deciding to follow his dreams. The next thing he does is to order a microphone with Prime next-day delivery and try to conquer his audience.

The end of the spot sees Napoleon doing a stand-up number in front of his soldiers and making them laugh with a joke that tackles his height.

In another recent commercial, Medusa, the priestess cursed to turn people into stone, orders sunglasses with Prime and makes friends. However, as the spot ends, it turns out not everyone trying to befriend her ends well.