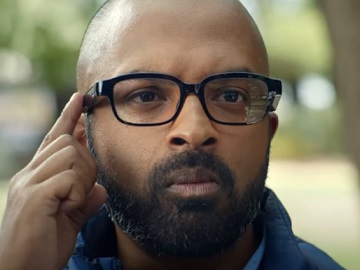 The spot features two bespectacled men sitting on a bench in a park. The voiceover says that one of these dads is wearing Echo Frames, smart audio glasses with Alexa, and asks viewers to guess which. She gives a few hints which makes viewers it’s the dad on the right, who’s with a smartphone in his hands, but it turns out it’s actually the other dad. The voiceover mentions that one of them is listening to the playoffs and just got a text from his wife telling him he’d better be bringing her an ice cream thing, too. At this point, a young girl riding the bike stops in front of her dad, the first one, to ask what’s the score, and the voiceover confirms that it’s him the one wearing Echo Frames.

The commercial ends with the voiceover introducing the Smart Audio Glasses with Alexa. These glasses allow users to take the magic of Alexa with them on the go. They can use voice to make calls, listen to music, podcasts or audio books, control their smart home devices, get updates and news and stay organized with customized notifications and reminders.

The Echo Frames are available for purchase on Amazon for $249.99.