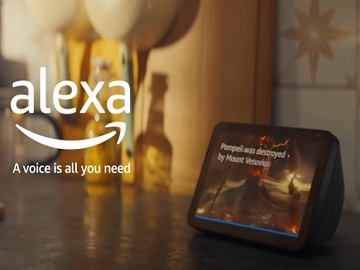 Amazon promotes its Amazon Echo Show in a new ad, which highlights that now you can pick up facts without putting down lunch.

The 20-second spot opens with a man standing among dozens of people living in an ancient town and stopping one of them to ask what year it is. He learns that it’s 79 A.D. and it soon turns out that he’s in Pompeii and the locals running by in horror are scared by Vesuvius erupting. The man, who’s holding a sandwich in his hand, is soon transported back to his kitchen, where his daughter is doing her history homework and his Amazon Echo Show gives him the answers he needs to help his daughter with the homework. Asked about the name of the volcano that destroyed the city, the father asks Alexa the same question, but in a whisper.

The ad concludes with the tagline “A Voice Is All You Need” flashing across the screen.

Previous: The World is Going Hybrid with IBM Commercial
Next: Harry’s Razor Not the Same Commercial Song