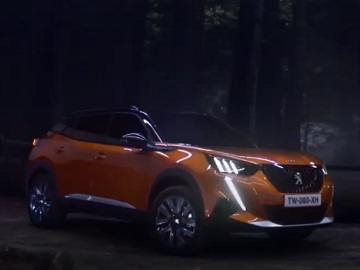 “From augmented reality to augmented driving pleasure with new Peugeot 3D i-cockpit” an onscreen line reads in the opening of the 30-second ad, which follows a young woman as she leaves the office, where her work involves augmented reality, and drives out of the city, to the woods, where she meets with friends.

The spot highlights that “Driving takes a new dimension” with the new Peugeot 2008 SUV with Peugeot 3D i-Cockpit.

The tagline “Unboring the future” also flashes across the screen as the woman and her fellows are heading into the parking lot and the car takes center stage.

The soundtrack music is the 2017 single “Waiting For The Stars” by French electronic music producer Vitalic featuring David Shaw, from Vitalic’s “Voyager” album. The song is available for purchase on Amazon for $0.99.