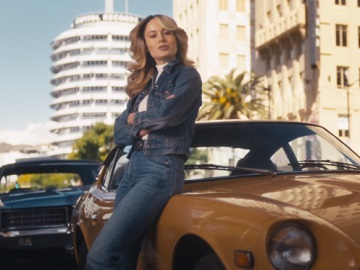 The 60-second ad opens with the Captain Marvel actress rocking a double denim ’70s look and shifting gears in an S30 while asking viewers if they remember when driving was fun. “Driving used to be an act of freedom. Inspiration. Cars were our sanctuaries and co-conspirators. We had posters on our bedroom walls and toy tracks running down our stairs. But somewhere along the line cars just got boring,” she says, adding, from the wheel of the all-new Nissan models, that “you deserve a car that thrills you. A car that puts goosebumps on your goosebumps. Like hot yellow sports cars with three pedals. Pickup trucks that can take you places you never knew existed. Colorful crossovers. Electric cars that have driven billions of emission-free miles. Cars loaded with technology. You deserve a car that gives you something back when you hit the pedal. And there’s a car company that believes that, too. One that has been delivering thrills at every turn for 80 years. This is the new Nissan”.

The commercial features the Nissan Z Proto, which is everything you know and love about the iconic design with a twin-turbo V6 engine, Ariya, the automaker’s first-ever electric crossover, the all-new 2022 Frontier and 2022 Pathfinder, which have both been redesigned to take your adventures to new heights.

Brie Larson is the ambassador for Nissan for almost 2 years. However, her first ad for the automotive brand, released in March 2020, for the Nissan Sentra, has caused some backlash. Titled “Refuse to Compromise,” the spot was aimed at empowering women, but it has been criticized for the feminist agenda.

She also starred starred in an Audi commercial back in 2019 when Captain Marvel was released, and in ads for Nintendo Switch.