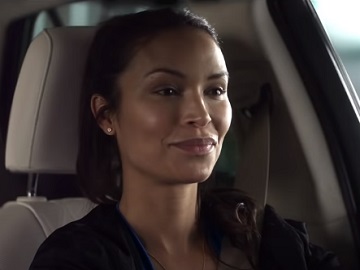 Buick promotes the All-New Buick Envision as an SUV built around all of you in its latest commercial, titled “Quadruple Take”.

The spot features fours versions of a young woman who gets into her Buick Envision after a spinning class that was “brutal”, according to her.

The casual version of the woman tells her to try the car’s massaging seat and the glamorous version, who’s sitting in the back seat, asks if she can use Apple CarPlay to put some music on. The latter, who learns that she can because it’s wireless, is asked by the business version to choose something they all like. The business version wants to know the Buick’s WiFi password and, hearing it, she suggests picking a stronger password.

At the end of the commercial, the young woman uses the available enhanced automatic parking assist system for a parallel parking in a tight spot and impresses her partner, who was waiting for her and tells her she outdid herself.

“Buick Envision. An SUV built around you… all of you,” the voiceover says at the end of the spot.