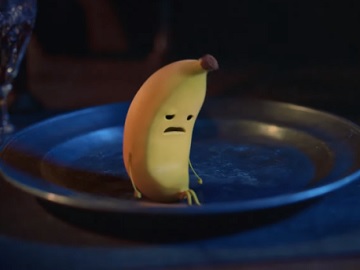 Aldi has released a teaser for its Christmas advert, introducing a new animated character: Ebanana Scrooge.

The spot features the banana seated on a silver plate, near a mince pie left for Santa Claus on Christmas Eve. When the sweet treat is taken away by a mysterious hand (Santa’s, most probably), Ebanana shouts “Santa, wait… why didn’t he take me?” He then jumps up and, visibly upset, declares that he hates Christmas.

Aldi’s Christmas advert will be released on national TV and online on November 11. Until then, fans are left to wonder if Kevin the Carrot will return. The nation’s favourite plucky vegetable has starred in Aldi’s Christmas campaigns in the past years and has become so popular that the plush versions of him and his family sell out every year.

Aldi is the latest brand to unveil its holiday ad. Vodafone, Boots, Lidl, John Lewis, Asda, TK Maxx have all launched their Christmas adverts, each celebrating the joy of connecting with each other.