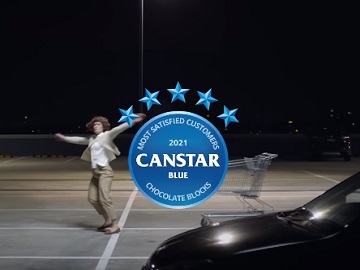 Aldi Australia has released a new commercial to announce that its Choceur Chocolate Blocks have been awarded best chocolate blocks by Canstar Blue 2021.

The spot features a woman dancing in an empty Aldi parking lot and doing some stunts with her empty shopping trolley. She is seen gliding through the carpark while lying across the handle of the trolley and gliding while crouched on the back of the trolley with one arm outstretched – all while in the background Palmer Rockey’s song “Feelings of Love” plays. This track, included on the 2020 album ” Blast from the Past Movie Soundtracks”, is available for purchase on Amazon UK for £0.99.

“Must be something in the Aldi chocolate. It did just win the award for Best Chocolate Blocks in Australia,” the voiceover says, adding the retailer’s tagline, “Good Different”.

Created by Sydney agency BMF and first released in 2017, the ad became the subject of numerous complaints that it promoted dangerous behavior, particularly to children. ALDI dismissed these claims, saying the ad “was clearly satire and fantasy.” The Advertising Standards Board (ASB) has also dismissed the complaints, declaring that the ad “was highly stylized and was not encouraging or condoning this behavior and did not depict material contrary to Prevailing Community Standards on health and safety and did not breach Section 2.6 of the Code”.

The $3 Choceur chocolate range, available for purchase at Aldi stores around the country, has taken the top spot in consumer group Canstar’s Most Satisfied Customer Awards, with Lindt and Cadbury following. Canstar surveyed 1000 customers for their first ever review of chocolate blocks and Choceur scored five stars for most categories including taste, value for money, packaging design and overall satisfaction, and was rated four stars for variety. The Choceur range, made with certified sustainably sourced cocoa, includes coffee and cream flavours, milk and white chocolate, salted pretzel, dark almond and caramel-filled white chocolate. There are also mini chocolate blocks available in hazelnut, white chocolate, and marzipan and white crisp.