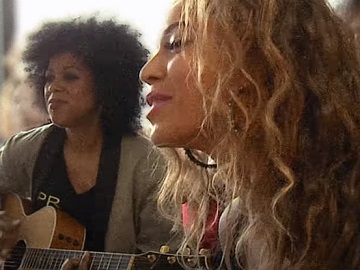 Adidas has launched a new ad campaign, called “Impossible Is Nothing,” to inspire people to saw possibilities where others see the impossible.

One of the spots features footage of Beyoncé as a child juxtaposed with more recent footage from her Formation World Tour. “When she was finding her voice, she didn’t see limits. She saw possibilities. To be more than a singer, more than a dancer, more than an icon. She saw that she could be an inspiration to all people. So that she and they could see possibilities, too,” the voiceover says in the 60-second spot, which is scored by Beyoncé’s single “All Night”.

The latest installment in the series features Ahmed Rakaba, a sreet soccer player living in Berlin (Germany), who reimagined streets as a pitch, a playground, and a stage, and invited athletes everywhere to see the possibilities in rising up from anywhere.

The new campaign also features archival montages showing an intimate and unseen side to several other legendary celebrity partners who saw the world with possibilities where others only see the impossible, such as Cyrill Gutsch, who saw the possibilities in a simple idea of turning plastic waste into products and that, together, we can inspire a generation to preserve and protect the planet, Beyonce, who invites people to use her platform as a stage to celebrate our differences with all people, WNBA (Candace, Liz, Nneka, Layshia, Chiney, Angel, and Moriah), who saw the possibilities in using their voices to change the conversation, Russian ice skater Alexandra Trusova, Damian Lillard, All Blacks rugby team, Tifanny Abreu, the first trans woman to play in Brazil’s professional volleyball super league, and more.