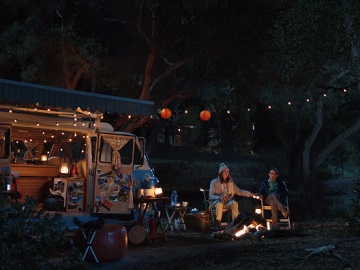 Fuel brand 76 has brought back Jean and Gene for a series of new ads, called “Jean and Gene’s Awesome Adventure Road Trip”.

The spots, created by agency Carmichael Lynch and directed by Matt Lenski, feature the couple as they enjoy a road trip together. One of the ads sees them camping and talking about Jean’s fear – turkeys. When she hears a turkey nearby, she rushes to hide of it, even though Gene tells her that turkeys are peaceful birds. Believing that it has probably been tracking them for days, Jean goes into the trailer, informing her partner that their talons can cut glass and various types of stone, and they have X-ray vision. Gene, who can’t help point out that there is a lot of specific information about turkeys, learns that, if he gets attacked, Jean won’t save him.

The commercial ends with the tagline “We’re on the driver’s side” flashing across the screen.

Jean and Gene first appeared in 76’s ad campaign in 2018, when the fuel brand aimed at attracting a younger audience.