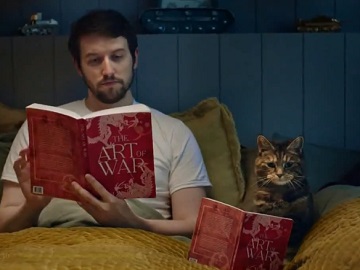 The free-to-play MMO PC video game “World of Tanks: The Art of Winning,” developed and published by Wargaming, is advertised in a new commercial from agency Brave and directed by Stephen Pipe.

The spot, which encourages gamers to “do their homework,” stay calm under pressure and rise to the challenge of signing up and mastering World Of Tanks, features Frank, a young man who has just a battle in this action packed strategic shooter.

The voiceover explains how that was possible, giving the odds. It turns out he reads Sun Tzu’s “Art Of War,” rise to the challenge and builds an enormous pirate ship-themed bed for his daughter, and wins at a game of Jenga against a dreaded opponent by staying calm under pressure.

World of Tanks contains a catalogue of over 500 of history’s most iconic tanks, where players are invited to compete in epic online historical tank battles.

Felix Morgan, Global Head of Strategy, World of Tanks said in a press statement: “As video-games have become more mainstream there has been a trend towards ease and accessibility, but over the last decade of our existence World of Tanks has retained our focus on delivering a game with depth and complexity. In this new campaign with Brave we have brought that to the forefront, dramatizing the complex decision making that leads to victory in World of Tanks with an ad that celebrates what makes our players special. We hope this message will resonate with even more players and invite them to discover that in World of Tanks your brain is your most powerful weapon”.