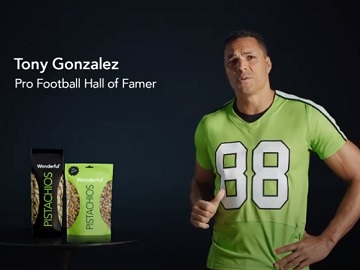 Wonderful Pistachios has released a commercial featuring Tony Gonzalez, who says he gets his protein from plants.

“I get my protein from plants like Wonderful Pistachios,” the pro football Hall of Famer says in the opening of the 15-second spot.

“Crazy? Not as crazy as seeing the first Jumbotron in the ’80s,” he adds, recalling the moment he saw himself “on TV” for the first time and got so distracted he ended up getting tackled and carried off in a stretcher.

“The Next Big Thing” multi-million campaign includes six different humorous commercials and also features world-class weightlifter and Olympic athlete Kendrick Farris. Both Farris and Gonzalez follow a plant-based diet. The spots aim to highlight that, while getting protein from plants might sound strange to some, it’s not as strange as some of the things athletes used to do in their sports, in the past. For instance, football players used to play without a mouthguard in the 1940s, the football goalpost was in an awkward position in the 1970s (in front of the endzone), and weightlifters used to wear leotards in the 1980s.