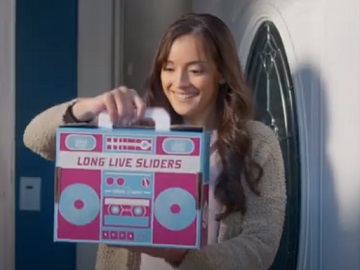 The spot, which re-enacts a famous movie scene where the protagonist holds a boombox above his head outside the home of his love interest, features a delivery guy holding a White Castle Crave Clutch the same way to annouce his arrival. However, the customer, a young woman who rushes outside, receives a text message that also informs that her UberEats order has arrived.

“Sometimes, love comes when you most expect it,” the voiceover says at the end of the 30-second commercial, urging viewers to get the White Castle Crave Clutch with any 20 sliders and get $3 off when they order with UberEats.

White Castle has thus added another unique container its line-up of iconic packaging. The colorful, easy-to-carry Crave Clutch, which holds 20 sliders of any variety, has a faux leather stitched cardboard handle, and one side looks like an old-school Boombox, complete with an image of a blank cassette tape where customers can write their favorite songs. The fast-food hamburger chain, which is also the inventor of carryout, has also launched a campaign on Instagram, asking customers to share the title of the song they most like to listen to when enjoying White Castle.

There is also a Crave Clutch bundle (Share-A-Meal #9), which includes 20 Original Sliders and four small fries.