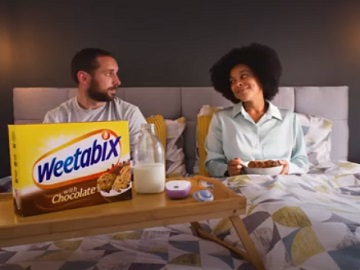 Weetabix showcases its range of flavors in a new ad.

“Have you had your Weetabix” the voiceover asks at the end of the 20-second ad, which also implies – through a panoramic view of a town – that all of its inhabitants are eating Weetabix (with colorful sparks popping out and up in the air from their houses).

Weetabix is made from whole-grain wheat and comes in the form of palm-sized rounded rectanhle-shaped biscuits. The version sold in the United Kingdom has 3.8 g of fibre in a 37.5 g serving (2 biscuits) (10.1% by weight).The product sold in Canada and the U.S. has 4 grams of fibre in a 35 g serving (11.4% by weight). Variants include organic and Weetabix Crispy Minis (bite-sized) versions.

In 2017, the brand reintroduced the 1990s slogan “Have you had your Weetabix?” in a variety of spots that re-imagined the outcome of fairy tales and historic events. One of them takes a humorous turn on the English fairy tale Jack and the Beanstalk. In it, the giant states: “Fee fi fo fum, I smell the blood of an English man” and Jack answers “Fee fi fo fix, I’ve just had my Weetabix”, which makes the giant to rush out of the room.