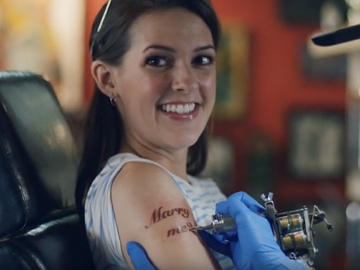 Washington Lottery continues its #LetsImagineTogether campaign with a new installment.

The spot, part of the Department of Imagination series, is based on the statement of Amanda M, a woman who said that, if she won Washington’s Lottery, she’d propose to her boyfriend every day, and features a woman who proposes to her boyfriend every single day, in all kinds of moments: on top of a mountain while hiking, during a yoga class, while having a pizza out, during a paintball session, while playing bridge, while brushing their teeth, at night, and more.

“#LetsImagineTogether” an onscreen line reads at the end of the ad.

The Department of Imagination series also includes other spots, based on what other winners said they would do if they won. Among them are a world cheese tour, making a film about a Sasquatch who hunts down snowboarders one by one, delivering pizza just for fun driving a sports car, buying enough land so that they could walk for an entire year, and still not make it to the other side of his property, and more.

Previous: Capital One Walmart Rewards Card Couple with Puppy Commercial
Next: Huggies Be Comfortable in Your Skin Commercial Song