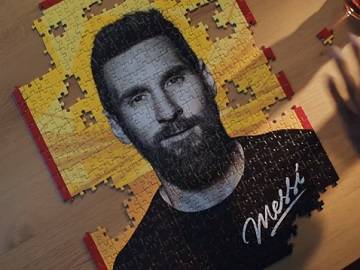 Walkers Crisps celebrates its status of proud partner of the UEFA Champions League 2019/20 in a new commercial, which promotes the Walkers Max crisps.

The 20-second spot opens with someone grabbing and opening a bag of Walkers MAX Strong and with an onscreen line urging viewers to drop everything. The next shots illustrate the way some people dropped everything – a cake was abandoned on the kitchen table, a wall that was supposed to be painted was left unfinished, a video game and a puzzle featuring Messi were “abandoned” as well. All because it’s crunch time and UEFA Champions League begins.

“Drop everything. It’s crunch time,” the voiceover says at the end of the commercial, which features the songs “Unchained Melody” by The Righteous Brothers (in the opening) and the UEFA Champions League anthem.

In 2019, Walkers Crisps enlisted Spice Girl to star in a campaign for Walkers Oven Baked, which featured them as fans so big they didn’t want to share the crisps with anyone. For the 2019 Christmas ad, the brand partnered with Mariah Carey.