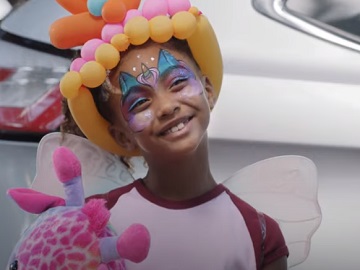 The spot features a couple of grandparents returning from a fun day out with their granddaughter and talking about how Voya helped them. They say their retirement plan with Voya gives them confidence and that Voya helps them with achievable steps along the way so they can spend a bit today knowing they are prepared for tomorrow.

When their granddaughter gets out of the car, her father is surprised to see her with so many presents and accessories and asks the girl’s grandfather, who it turns out is his father, if he thinks they overdid it. The girl, whose face is painted with a unicorn and wears balloons on her head and holds a pink stuffed giraffe in her hand, believes they didn’t. The grandfather also asks his wife, who’s just grabbing from the truck a huge teddy bear, if she thinks they overdid it, but she gives no sign of believing that.

“Technically, grandparents can’t overdo it,” the voiceover says at the end of the commercial, adding the tagline “Well planned, well invested, well protected”.