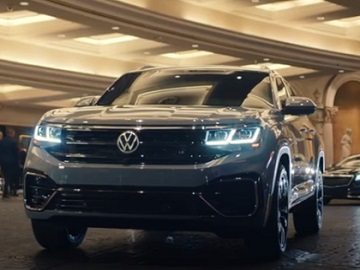 Volkswagen showcases the Atlas Cross Sport in a new commercial, which presents the SUV as “the right kind of excess”.

The film stars actor Paul Giamati as the accountant of a celebrity client (played by Kieran Culkin), who’s looking for him at the reception of a hotel in Las Vegas. Knowing the young man’s history with expensive purchases, the accountant is relieved to finally find him. “I thought we finally had a breakthrough with the Volkswagen,” he tell him, scolds him but, after getting into the Atlas Cross Sport, admits that it was worth it.

“Excessive where it matters.” an onscreen line reads at the end of the 60-second ad, which sees the client taking his accountant to an unknown destination and the tagline “Drive bigger” flashing across the screen.

A smaller and more maneuverable version of the highly-successful VW Atlas, the 2020 Volkswagen Atlas Cross Sport recently arrived at dealerships nationwide. Featuring showstopping styling, up to 77.8 cubic feet of cargo space, and an available 5,000-lb. towing capacity, it comes with engine choices that include a 2.0L turbocharged 4-cylinder and a 3.6L V6.