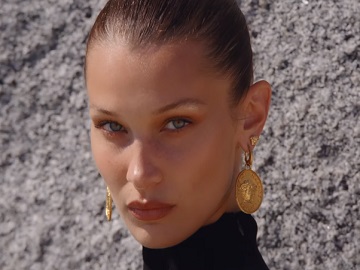 Versace promotes its new Dylan Blue Pour Femme fragrance in a campaign that “captures the celebratory mood of summer”.

Shot on a secluded island off the coast of Sardinia and directed by Gordon von Steiner, the 60-second film features Bella Hadid who, according to the fashion label, “encapsulates the confident and sensual fragrance,” as she enjoys the crystal-clear waters and poses on the unique rock formations. Models Hailey Bieber and Louis Baines also star.

The soundtrack is by Clara Deshayes.

The Dylan Blue Pour Femme fragrance has notes of fresh blackcurrant and apple sorbet fused with a bouquet of wild blooms, woody base notes featuring patchouli, styrax and white woods, and comes in an elegant 100ml bottle featuring curved lines reminiscent of a Greek amphora in deep blue with tone gold-tone accents. It is available for purchase on the brand’s website for €121.