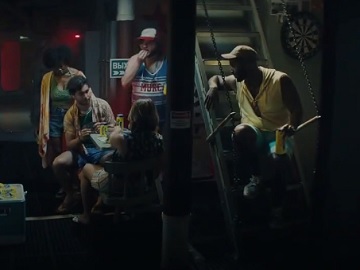 The spot features several guys playing cards and drinking Twisted Tea on a submarine. When one of them sets out to find the captain and ask for more sardines and a charger, he also takes the opportunity to ask him when they will be able to go back on land. “You dance the Barynya very well!” answers the captain, who then starts to imitate the guy’s dance. The next scene reveals that earlier that day the guy and his fellows were dancing with the captain and other crew members of the submarine on the beach. Asked if they want to go on a submarine ride, the youngsters said ‘Yes’ which brought them to the current situation, which also includes having no charger on them.