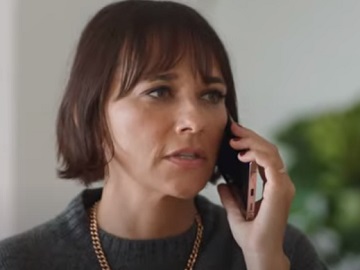 T-Mobile promotes its new TV service, called TVision Live by T-Mobile, in a new commercial, highlighting that it offers you everything you love about cable and streaming services including live sports and local news without the clunky boxes, annual contracts, bloated lineups, and high costs.

The 2-minute ad features Rashida Jones at the phone with her cable company. She explains to her sister, who’s with her, that she had to sign up for something called mega bundle in order to get live news and sports, but it turns out she still has to call the cable company and upgrade to be able to see a specific sports channel. When talking to Dave, the agent answering her phone call, she expresses her dissatisfaction, revealing that she lives a “cable TV nightmare” (her bill is doubled after one year, she’s forced to pay all kinds of fees, such as mandatory franchise fee and an equipment leasing fee, and she’s also forced to get items she doesn’t need, such as an alarm system, a landline, and more). In the meantime, Rashida’s sister works on a huge puzzle, eats ice cream, and, eventually, after losing her patience, decides to make a change in Rashida’s home and life and get TVision Live by T-Mobile.

At the end of the video, the voiceover highlights that “it’s time to cut the cord” and informs that with TVision by T-Mobile you get live news and sports for $40/month (plus tax), with no annual contract and no exploding bills.

The new TVision lineup also includes TVision Vibe, which is the cheapest option ($10/month) and comes with more than 30 channels of live and on-demand content including AMC, BET, Discovery, Food Network, Hallmark, HGTV, MTV and TLC, TVision Live+ ($50/month), TVision Live Zone ($60/month). Consumers who sign up for Live+ or Live Zone between November 1 and December 31, will get a free year of Apple TV+ as well. The new TVision services are available on Android and Apple mobile and TV devices, as well as Amazon Fire TV.

The service went live for T-Mobile postpaid customers starting November 1, for T-Mobile prepaid subscribers will go live by year’s end, and consumers without T-Mobile wireless some time in 2021.

Moreover, T-Mobile has announced that it will be launching a new $50 HDMI streaming device called the TVision Hub.