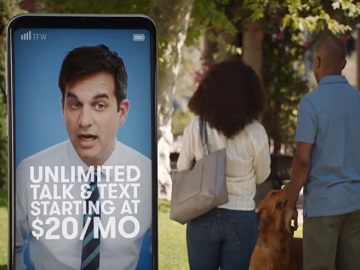 Tracfone has released a new ad to highlight that the new Tracfone Wireless puts you in control with Unlimited Talk & Text plus Unlimited Carryover Data on America’s Largest & Most Dependable 4G LTE† Networks starting at $20/month.

The spot features a guy in a giant smartphone approaching people in the street and telling them about the new Tracfone Wireless. First, he approaches a man sitting on a bench who’s trying to eat a sandwich he packed from home, asking him why he’s paying so much for wireless if he wants to save money. He then tells him that Tracfone Wireless gives you all kinds of control. Other passersby are informed that the carrier lets you keep your leftover data each month and gives unlimited talk and text, on America’s best 4G LTE network, starting at $20 per month, with no contract.

The commercial ends with the guy in the giant smartphone declaring “This is your wake-up call, people” and adding the tagline “Now you’re in control”.