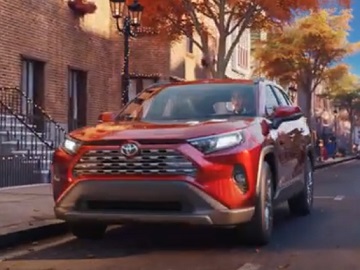 Toyota has released a heartwarming commercial, urging us to “Be there for someone”.

The spot, titled “The Journey,” opens with a father arriving home, only to immediately leave again, together with his young son, to “chase” his son’s letter to Santa, which had been blown away by the wind through the open window. The two enjoy a ride together in the family’s Toyota RAV4, driving through the city, down highways and off-road to a snowy mountaintop, where they manage to find the errant letter. Reading his child’s wish (the boy wrote all he wanted was a trip with dad) after grabbing the piece of paper just in time, the father becomes teary-eyed and realizes that spending his time with his son means so much.

“Be there for someone” an onscreen line reads at the end of the ad, which is scored by Stacey Walker’s “Here for You”.

Toyota invites people to check out its deals during the Toyotathon, a sale event that gives customers the chance to get offers on multiple models including 2021 RAV4 and RAV4 Hybrid, Camry, Highlander, Tacoma, Corolla, and more.