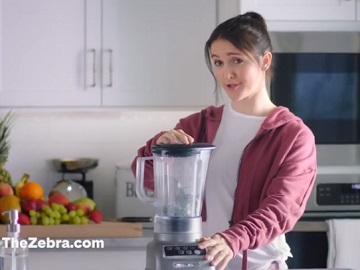 The Zebra, a website that offers you the possibility to compare car insurance quotes from hundreds of providers side-by-side in minutes, hassle-free, advertises its services in a new commercial.

The spot, entitled “Money Blender,” features spokesman David Longobardo saying that, each year, Americans waste over 21 billion dollars by overpaying on car insurance, while in the background a woman is shown throwing money into a blender and blending it. He then urges the young woman to enter thezebra, but she is reluctant, asking if this is another car insurance ad. He specifies that The Zebra compares them all and shows you who can actually save you money.

The commercial ends with the voiceover urging viewers to compare car insurance for free at thezebra.com.

Longobardo has appeared in another commercial, pointing out the exact same thing (about the millions Americans waste by overpaying on car insurance), which features people taking out their trash bins, which are full of cash.

Another recent ad features a man (played by Scott Mena) cooking a rolled-up wad of money over a fire pit like he’s toasting a marshmallow, while the Zebra’s spokesperson Rasheda Isaac highlights that the comparison website helps you to save time and money by letting you compare car insurance quotes from top providers.